A biblical response to an insensitive government Christian persecution is any hostility experienced from the world as a result of one’s identification as a Christian. From verbal harassment to hostile feelings, attitudes, and actions, Christians in areas with severe religious restrictions pay a heavy price for their faith. Beatings, physical torture, confinement, isolation, rape, severe punishment, imprisonment, slavery, discrimination in education and employment, and even death are just a few forms of persecution they experience on a daily basis. According to Open Doors, an international ministry serving persecuted Christians around the world, in just the last year there have been:

5,898 Christians killed for their faith

5,110 churches and other Christian buildings attacked

Nigeria is one of the most difficult places to be a Christian in the contemporary world.

Nigeria in the Global Eyes

Open Doors describes Nigeria as one of the most difficult places to be a Christian in the contemporary world. In 2015, there were 4,028 killings and 198 church attacks that Open Doors was able to record. The figures recorded for the previous year were 2,484 killings and 108 church attacks. An estimated 30 million Christians in northern Nigeria form the largest minority in a mainly Muslim environment and they are at risk of violent persecution. As the report states, ‘For decades, Christians in the region have suffered marginalization and discrimination as well as targeted violence.’[2] Catholic Bishop Matthew Hassan Kukah, in his homily at the funeral mass of seminarian Michael Nnamdi at the Good Shepherd Seminary, Kaduna, described northern Nigeria as ‘one large graveyard, a valley of dry bones, the nastiest and the most brutish part of Nigeria’.

In 1966 the United Nations developed the International Covenant on Civil and Political Rights (ICCPR) in addition to the Universal Declaration of Human Rights. Article 18 of the ICCPR focuses on four elements of religious freedom. Nigeria is not only a signatory to the treaty; the spirit of this agreement is also entrenched in the nation’s constitution. But the realities on ground show the contrary. According to THISDAYLive of 4 February 2017, ‘The United States House of Representatives referred to Nigeria as the most dangerous place for Christians in the world and that the impunity of those responsible for the killing of Christians in the country “seems to be widespread.”’[3] The Open Doors World Watch List 2022 ranks Nigeria as 7th amongst 50 nations where Christians are facing extreme or very high persecutions. According to the study, there are more Christian persecutions in Nigeria than Saudi Arabia, the spiritual headquarters of Islam. Nigeria alarmingly ranks fourth in the Christian persecution list in Africa, trailing behind Islamic and totalitarian states such as Somalia, Libya, and Eritrea.[4] 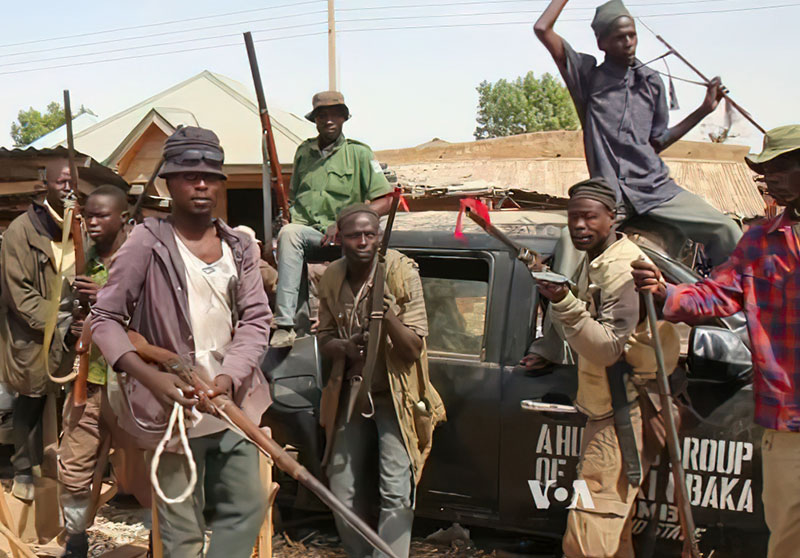 Persecutions of Christians in Nigeria and the Role of Government

The rising insecurity in Nigeria in recent years has reached an alarming state. Extra-judicial killings of innocent citizens and wanton destruction of properties have become daily incidents. The Nigerian government always claims to be on top of the situation but the reality on ground says otherwise. Besides the violence committed on human lives by the Boko Haram and Islam State of West Africa Province (ISWAP) terrorist groups, banditry, abduction, armed robbery, cultism, communal clashes, cattle-rustling, cattle herders, and farmers’ clashes and kidnapping have become ordinary in Nigeria. Unfortunately the government of President Muhammadu Buhari appears unable to tackle this crisis.

Before now, the leadership of the Christian Association of Nigeria (CAN) has been speaking against the insurgents’ tactics of targeting Christians and their worship centres. The outcry, however, reached its crescendo after the public execution of Reverend Lawan Andimi and a University of Maiduguri student, Daciya Dalep. Until the gruesome martyrdom of Rev Lawan Andimi on 21 January 2020, he was the chairman of CAN’s Michika local government area of Adamawa State. He was abducted for about a week and a ransom of N800,000,000 (an equivalent of €2M) was demanded. The Boko Haram insurgent group cruelly beheaded the 58-year-old clergyman, even after CAN’s leadership offered to pay a ransom of N50, 000,000 (about €128,000). To make matters worse, the disturbing video of his execution was released by his executors to the public. Since I saw that video, I cannot stop thinking about the trauma suffered by his family and close associates.

The rising insecurity in Nigeria in recent years has reached an alarming state. Extra-judicial killings of innocent citizens and wanton destruction of properties have become daily incidents.

The gruesome video sparked massive public outcry about Christian persecution in Nigeria. CAN’s leadership declared three days of fasting and prayer against the rising spate of attacks on Christians. On the last day, a peaceful protest was carried out by Christians and church leaders across the nation in order to challenge the government to rise up to its responsibility. Apart from CAN, many local, national, and international organizations such as the Muslim Rights Concern, and prominent individuals such as Pastor E.A. Adeboye and the Sultan of Sokoto, condemned the gruesome murder of Rev Lawan Andimi and the worsening insecurity across Nigeria.

The Northern Elders Forum, a social-political group comprising eminent personalities who hail from northern Nigeria, condemned the killing of Christians as well. This is interesting because the majority of these individuals are Muslims. The convener of the Northern Elders Forum, Professor Ango Abdullahi, said in a statement, ‘The current government led by President Muhammadu Buhari has failed to secure the citizens from incessant attacks by bandits and terrorist groups.’[5] The group condemned the insurgents’ tactics of targeting Christians and publicising their executions. However, they appealed to religious leaders not to succumb to the insurgents’ efforts to incite religious groups against each other. Unfortunately entreaties to move the Buhari administration to a more robust action on the subject seems to have fallen on deaf ears. For instance, the Special Adviser to President Buhari on Media and Publicity, Mr. Femi Adesina, rebuffed the statement credited to the Northern Elders Forum concerning the targeted killing of Christians in Nigeria, claiming that their position was motivated by ‘hatred for President Muhammadu Buhari.’[6] Mr Femi Adesina had been challenged for blindly defending the actions of President Muhammadu Buhari and his administration. One of such challenges came from Aisha Yesufu, a devout Muslim and the co-convener of an advocacy group known as Bring Back Our Girls (BBOG), who released a video[7] questioning Mr Femi Adesina’s claim that the killings had reduced during the Buhari administration as compared to the previous administration of President Goodluck Jonathan.[8] Such defensive comments are what Nigerians get when they speak truth to power especially concerning such sensitive matters as the public security of all citizens, Christians or not.

Whatever the specific cases entail, in the escalation of kidnappings and murders, one cannot help but sense a systemic effort to subduing the very public presence of Christianity in Nigeria.

The wanton murder of Christians by insurgent groups has continued unabated. After the Andimi and Dalep outcry, four seminarians of the Good Shepherd Major Seminary in Kakau, Kaduna State, were kidnapped by gunmen. Three of them were released after some days while the body of the fourth member, Michael Nnadi, was found dead on 1 February 2020. On the same day, the body of Mrs Bola Ataga was found in Sabon Tasha after she and her two daughters (ages 8 and 3) were abducted on 24 January 2020 and had spent seven days in captivity. The kidnappers demanded a ransom of N120,000,000 from the family. The children were later released but it is unclear whether any ransom was paid. These are just a few of the numerous incidences of targeted killings aimed at Christians in recent years.[9] Whatever the specific cases entail, in the escalation of kidnappings and murders, one cannot help but sense a systemic effort to subduing the very public presence of Christianity in Nigeria. What Does the Bible Say about Christian Persecution?

The persecution of Christians is not a new development in the church. Peter and John before the Sanhedrin, Stephen, Paul and Silas, Shadrach, Meshach, Abednego, and Daniel are a few examples of believers who suffered as a result of their faith in God. Christians have been forewarned to be prepared to suffer for the gospel when the need arises. The Bible, however, warns that the suffering must be for the sake of righteousness. In John 15:20, Jesus warns his disciples that if those seeking power have subjected him to persecution, they will certainly subject his followers to persecution. Jesus goes on in John 16 to encourage his followers to stay true to their faith. He does urge compassion on the persecutors, for they seem blind to the truth, and in the last analysis, disciples are urged to be unafraid of those who can kill the body but cannot kill the soul. Rather, the final reward is in heaven.

On the one hand, we should not seek revenge, as vengeance belongs to God. On the other hand, as citizens of a nation where God has placed us, we pursue the due course of justice, especially because if we do not, it is the most vulnerable that will continue to suffer under violent persecutions.

Paul goes so far as to radically challenge the Christians of Rome in Romans 12:20-21 to act benevolently towards their persecutors. ‘If your enemy is hungry, feed him; if he is thirsty, give him something to drink, for by so doing you are heaping coals on his head.’ That said, we do find that when Paul is attacked, he uses the law of the land to seek defense, a defense that is employed to the cause of spreading the gospel. He appeals to the highest authority in the land, to Caesar, and while awaiting to see Caesar, he spreads the gospel in the imperial court and in prison; he also creates space for the Christian cause to he heard further and wider in the moment and in history.

This perspective is very important for Christians. On the one hand, we should not seek revenge, as vengeance belongs to God. On the other hand, as citizens of a nation where God has placed us, we pursue the due course of justice, especially because if we do not, it is the most vulnerable that will continue to suffer under violent persecutions.

Photo by Tope. A Asokere on Unsplash

Photo by Aaron Burden on Unsplash Babatomiwa M. Owojaiye serves as the senior pastor of First ECWA (Evangelical Church Winning All) in Ilorin, Nigeria. He is also a teaching and research fellow of the Centre for Research and Innovation of ECWA Theological Seminary in Igbaja, Nigeria. He is the CEO of The Centre for Biblical Christianity in Africa, an initiative established to contribute to the deepening of the roots of biblical Christianity in Africa and to the widening of the transformative impact of the Christian message in the public sphere. Babatomiwa holds a PhD in World Christianity from Africa International University in partnership with the University of Edinburgh.